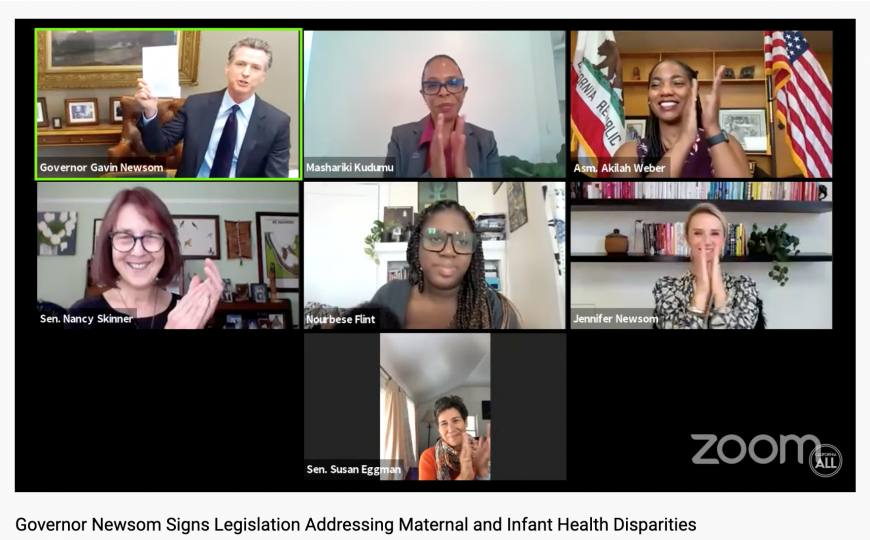 California Gov. Gavin Newsom today signed SB 65, the California Momnibus Act, by Sen. Nancy Skinner, D-Berkeley. SB 65 is aimed at reducing maternal and infant mortality that is disproportionately impacting Black families and other families of color. SB 65 will require the California Department of Public Health to investigate maternal and infant deaths and strengthen research and data collection on racial, socio-economic and other factors that contribute to these deaths and poor health outcomes.

“Gov. Newsom’s signing of SB 65, the California Momnibus Act, represents a significant victory for Black maternal and infant health. Despite our medical advances, more babies and mothers die during birth in the U.S. than in all other high-income countries, and these preventable deaths are disproportionately higher for Black families,” said Sen. Skinner, who is vice chair of the Legislative Women’s Caucus. “With the enactment of SB 65, California will help close racial disparities in maternal and infant deaths and save lives.”

“California is at the forefront of a movement addressing maternal deaths and severe injury, but we know there is a long way to go, particularly when it comes to tackling the egregious death rates of Black mommas. Every journey starts with a first step, and today’s step is critical. With this signature, California re-imagines maternal care for our most vulnerable pregnant folk while setting the bar for the rest of the country,” said Nourbese Flint, executive director of Black Women for Wellness Action Project. “We thank Gov. Newsom, Sen Skinner and her staff, as well as the Legislature and the many supporting organizations and people for advocating and investing in pregnant folks and babies. We look forward to continuing the work and further dreaming of creating a joyous birthing experience for all.”

“We’re thankful to the governor for recognizing the need for California to face its Black maternal health crisis head on. It’s not enough to identify the deep inequalities that created this crisis. By passing the California Momnibus bill, our state is making a downpayment on the investment needed to correct the disparities Black and Indigenous birthing people have faced for too long,” said Jen Flory, policy advocate, Western Center on Law & Poverty. “We are also thankful to all of the organizations, individuals, and legislative members that have led in this space to re-imagine what joyous birth should look like.”

SB 65 was developed in partnership with Black Women for Wellness Action Project and the Western Center on Law and Poverty, with the support of the March of Dimes, California Nurse Midwives Association, NARAL Pro-Choice California, the National Health Law Program, and a coalition of over 50 organizations.

SB 65 is part of a national effort to eliminate our country’s high Black maternal and infant mortality rates and complements the federal Black Maternal Momnibus Act of 2021, co-sponsored by over 80 members of the U.S. House of Representatives and U.S. Senate, including California Senate District 9’s own Rep. Barbara Lee (D-CA), as well as The Kira Johnson Act, introduced by U.S. Sen. Alex Padilla (D-CA).

SB 65 won bipartisan approval from the California state Senate on Sept. 10 on a vote of 31-5, after it garnered unanimous approval — 77-0 — from the state Assembly.

Earlier this year, key elements of SB 65 were included in the state budget including increased grants for low-income pregnant people on CalWORKs, a Guaranteed Income Pilot program, Medi-Cal coverage for doula services, and full-scope Medi-Cal coverage for birthing parents 12 months post-partum. SB 65 also establishes an implementation workgroup to maximize the reach of these new benefits into the communities where they are needed most.

Each year, an estimated two-thirds of the pregnancy-related deaths in the United States are considered preventable, according to a recent report. Research points to structural racism and other socio-economic factors as playing key roles in causing racial and geographic disparities in birthing outcomes.

Aspects of the California Momnibus Act that were included in the Budget Act of 2021, enacted earlier this year:

Sen. Nancy Skinner represents the 9th Senate District, is chair of the Senate Budget and Fiscal Review Committee, and is vice chair of the Legislative Women’s Caucus.