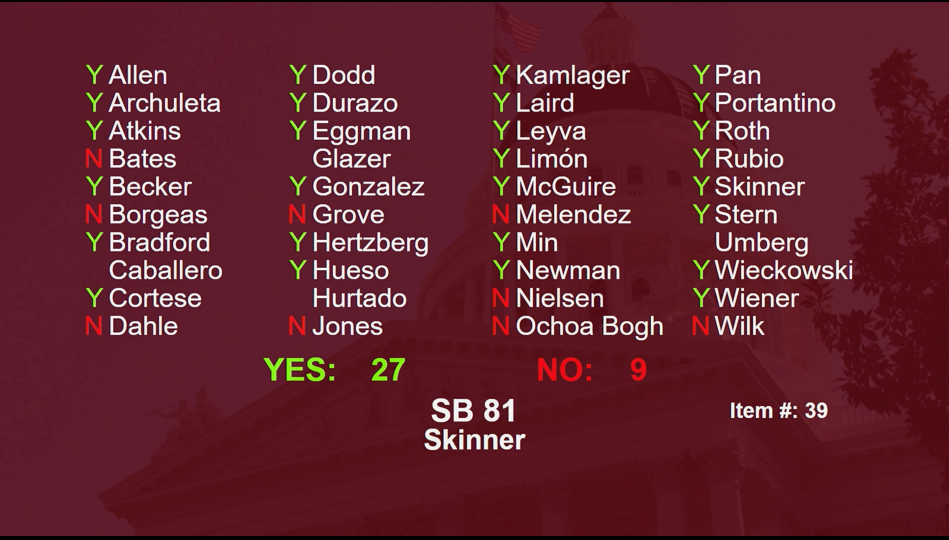 The California state Senate voted 27-9 today to approve Sen. Nancy Skinner’s SB 81, which would establish judicial guidance on the use of sentencing enhancements. SB 81 reflects one of the 10 recommendations made by the California Committee on the Revision of the Penal Code. The committee, of which Sen. Skinner is a member, was appointed by Gov. Newsom and the Legislature to comprehensively examine California’s Penal Code and issue recommendations for reforming it.

SB 81 is designed to address the proliferation of sentence enhancements in California, which can often double the length of years of a prison term and have been disproportionately applied to people of color and those suffering from mental illness.

“An overwhelming number of those incarcerated in California, in fact, 80%, will spend many more years in prison than the sentence associated with the crime they committed, because extra time was added by a sentencing enhancement,” said Sen. Skinner, D-Berkeley. “SB 81 sends a clear message to our courts: Use sentence enhancements judiciously and only when necessary to protect the public.”

At a hearing last year in front of the Penal Code Revision Committee, ex-Gov. Jerry Brown argued that California should “get rid of all of the enhancements” or reform the penal code so that judges are steered toward not imposing them. The committee also heard testimony that there is no evidence that sentence enhancements have improved public safety.

Peter Espinoza, a former longtime Los Angeles County Superior Court judge who is also a member of the Penal Code Revision Committee, is a strong supporter of SB 81. “SB 81 retains the authority of judges to impose sentence enhancements in order to protect public safety. And it follows in the footsteps of at least a dozen other states that have similar limitations on their use of enhancements,” he said. “Most importantly, SB 81 will allow California to finally restore the bedrock legal standard, ensuring the punishment fits the crime.”

Judges currently have the authority to dismiss sentencing enhancements but rarely do so, in part because California law does not provide clear guidance. SB 81 establishes clear judicial guidance that it is not in the interest of justice to apply a sentence enhancement when any of the following circumstances apply — unless dismissing the enhancement would endanger public safety:

SB 81 now goes to the state Assembly for consideration.