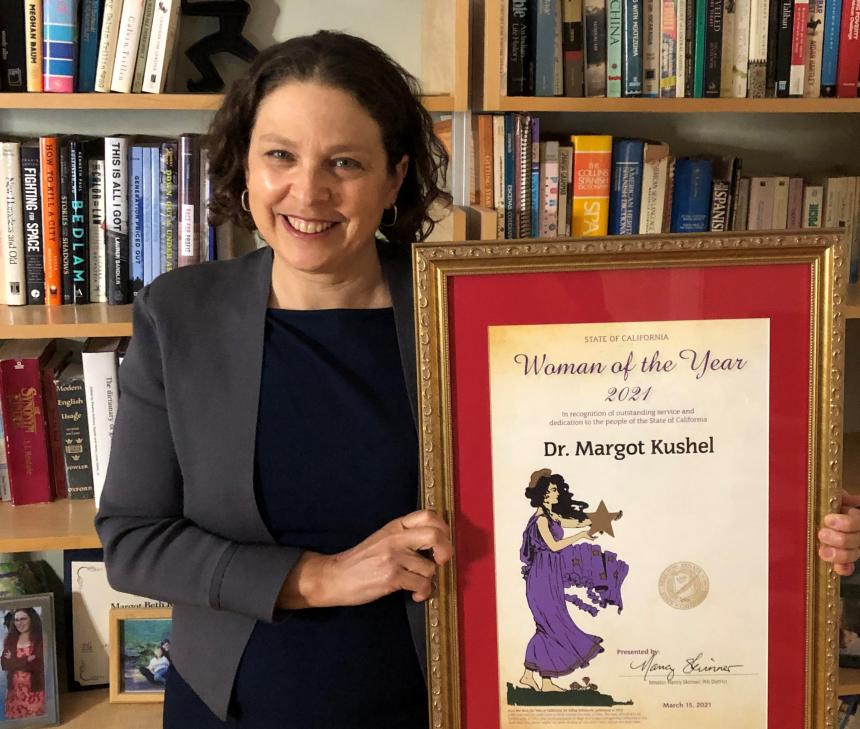 State Sen. Nancy Skinner, D-Berkeley, announced today her 2021 Woman of the Year for Senate District 9: Dr. Margot Kushel, a Berkeley resident and professor of medicine at UC San Francisco whose work on homelessness in Oakland and the Bay Area have garnered national acclaim.

Dr. Kushel, who serves as director of the UCSF Center for Vulnerable Populations and the UCSF Benioff Homelessness and Housing Initiative, is a nationally recognized expert on the health and public health issues related to homelessness. Dr. Kushel also helped develop California’s Project Roomkey initiative, which was established last year and placed thousands of homeless people in vacant hotel and motel rooms during the pandemic.

“Dr. Kushel’s groundbreaking research on unsheltered people living in Oakland encampments thoroughly debunked the harmful myth that people become unsheltered primarily because of drug addiction or mental health. Dr. Kushel has conclusively shown that poverty, lack of affordable housing, and structural racism are the primary drivers of homelessness in the Bay Area and beyond,” Sen. Skinner said. “Dr. Kushel’s work is crucial to helping us understand how and why Californians become unhoused and how we can create viable long-term solutions that address the real causes.”

At her medical practice at a public hospital, many of the people Dr. Kushel cares for are unsheltered. Her research, particularly on those living in homeless encampments in Oakland, revealed that more than half of the residents are elderly and most became homeless for the first time at age 50 or older — a dramatic increase from the 1990s when only about 11% of single homeless adults were 50 or older. In addition, her research uncovered that older Black residents are far more likely to become unsheltered than older white residents because of the ongoing effects of structural racism.

Dr. Kushel’s work has also shown that it is far easier to help prevent people from losing their homes, such as with rental assistance programs, than to rehouse them once they’ve become homeless.

“The answer to homelessness is not simply warehousing people in shelters where mostly Black, Brown and Indigenous people are out of sight, out of mind, but suffering horribly. To end homelessness we need to be talking about racial justice," Dr. Kushel stated in a recent Twitter post, adding, “Housing is an inescapable, unavoidable part of the solution. It makes treatment so, so, so difficult — bordering on impossible — if people are living on the street.”

“As California strives to end homelessness, we’re grateful to Dr. Kushel for her research and her determination to help us find successful and humane ways to do so,” Sen. Skinner added. “I’m honored to recognize her as the 2021 Woman of the Year for District 9.”