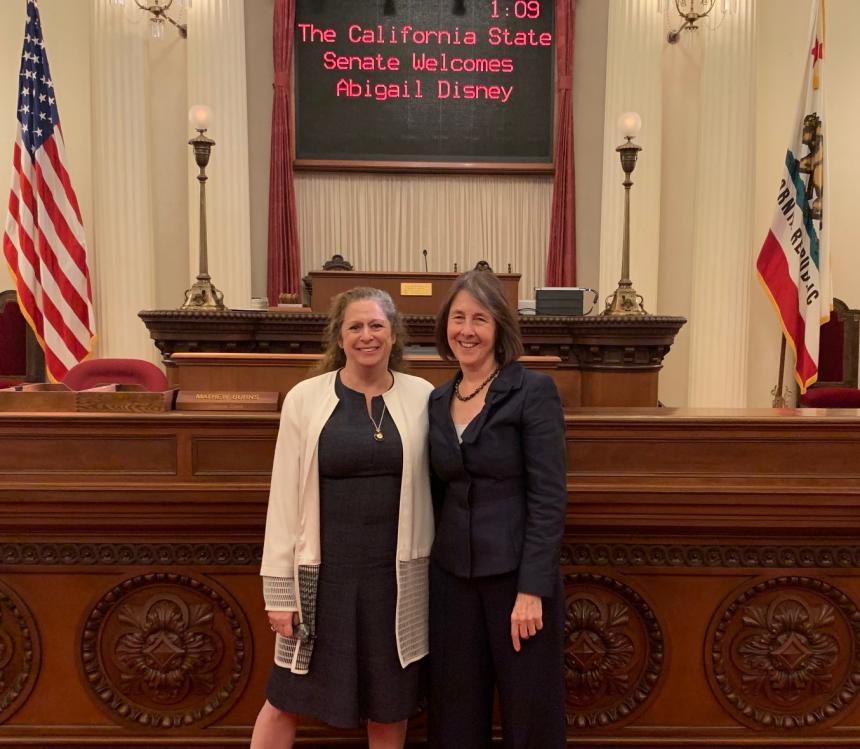 Abigail E. Disney is scheduled to testify in the state Capitol on Wednesday, Jan. 15, in support of SB 37, Sen. Nancy Skinner’s income inequality legislation, also known as “Corporate Fair Share for California and Californians.” An independent filmmaker, philanthropist, and member of the Patriotic Millionaires, Abigail Disney is the granddaughter of Roy Disney, co-founder of the Walt Disney Company. Abigail Disney has recently emerged as an outspoken proponent for addressing income inequality, particularly the ever-widening gap between what large companies pay their CEOs and their employees.

Art Pulaski, executive secretary-treasurer and chief officer of the California Labor Federation, is also scheduled to testify in support of SB 37 at Wednesday’s Senate Governance and Finance Committee hearing. Under SB 37, large corporations that do business in California would face progressive tax increases tied to the difference between the CEO’s pay and an average worker’s pay. The bigger the gap, the higher the tax.

“I’m honored that Abigail Disney, a leading voice to stop income inequality, is coming to the state Capitol in support of SB 37. Corporate CEOs in California and throughout the country pocket big bucks while American workers struggle to make ends meet,” Sen. Skinner said. “SB 37 will incentivize large corporations to stop overpaying their CEOs and give workers a fair share.”

“It is absolutely ridiculous for corporations to be making record profits while many of their employees are in working poverty. This is an issue close to my heart, and one I feel a duty to speak out on simply because it doesn’t appear that these corporations will do anything to fix the problem themselves,” Abigail Disney said. “It’s time for California to step in and rein in this excess, and that’s why I’m thrilled to support SB37.”

According to a 2019 report by the Economic Policy Institute, CEO compensation has soared 940% during the last four decades, while the pay of the average worker has remained flat. In the late 1970s, U.S. CEOs were paid only 30 times more than the average employee. Today, CEO compensation is hundreds, sometimes thousands, of times higher. For example, the Disney Company in 2018 reported nearly $13 billion in profit and gave CEO Bob Iger a compensation package that totaled about 1,400 times more than the median pay of Disney’s regular employees.

The Senate Governance and Finance Committee hearing is scheduled to begin at 9:30 a.m. on Wednesday, Jan. 15, in room 112 of the Capitol. The hearing will be livestreamed on Senate.ca.gov.