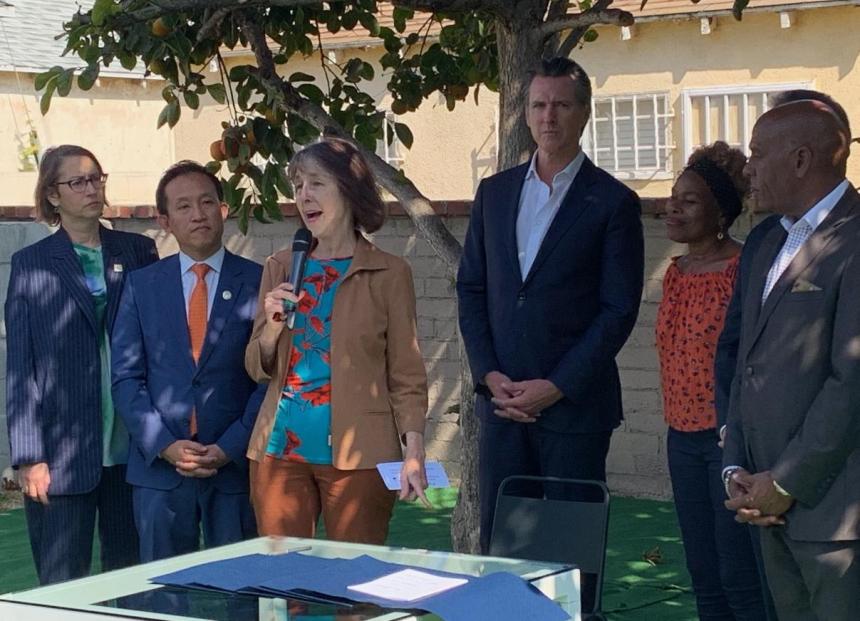 Gov. Gavin Newsom today signed into law Senate Bill 330, the Housing Crisis Act of 2019, by state Sen. Nancy Skinner, D-Berkeley. SB 330 is designed to speed up housing construction in California during the next half-decade by slashing the time it takes to obtain building permits, limiting fee increases on housing applications, and barring local governments from reducing the number of homes that can be built.

“We have a housing crisis,” Skinner said. “California’s failure to build enough housing has resulted in the highest rents and home ownership costs in the nation and has deepened homelessness. SB 330 green lights affordable and market-rate housing that already meets local zoning rules and prevents cities from enacting new regulations that might limit the housing we so desperately need.”

California currently ranks 49th in the nation for the number of housing units per capita. This extreme scarcity has led to a median home price of more than $610,000 — far higher than many Californians can afford. Nearly a third of California’s renters must spend more than half of their incomes on rent. That’s why nonprofit affordable housing developers up and down the state strongly supported SB 330.

“California families and workers need more affordable home options and opportunities, and they need them now,” said Pedro Galvao, senior policy manager of the Non-Profit Housing Association of Northern California. “SB 330 recognizes the urgency of the situation and maintains consistent rules and regulations to allow communities to more quickly address the housing needs of our families, friends, and neighbors.”

SB 330 is based on the premise that much of the housing California needs has already been approved in concept by local governments through existing zoning rules, housing elements, and other plans. According to a 2019 report by UCLA Lewis Center for Regional Policy Studies, California cities and counties have approved zoning for 2.8 million new housing units.

Recent studies have pointed to two major causes for the homebuilding slowdown: Cities and counties often levy burdensome fees on housing projects, and those trying to build housing, whether a single-family home or a multiunit affordable development, frequently face lengthy delays after submitting their permit application.

SB 330 is designed to address these problems. Until 2025, the new law requires cities and counties to slash the time it takes to process permits for housing that meets the local government’s existing rules, and it caps the number of public hearings on a housing project proposal at five. Cities and counties are also prohibited from hiking fees or changing permit requirements once the project applicant has submitted all the preliminary required information. Additionally, urban areas are barred from changing building design standards, reducing the number of housing units allowed (downzoning), establishing a population cap, or enacting moratoriums on new housing construction.

“California is in a deep and unprecedented housing crisis fueled by a lack of new homes. This problem is in part caused by the high cost of construction, which is a significant issue particularly for affordable housing development. SB 330 brings critical relief in this area by providing more certainty on the time it takes to get through the approval process, as well as locking in impact fee amounts once a project application is deemed complete,” said David A, Garcia, policy director for the Terner Center for Housing Innovation at UC Berkeley. “Moreover, our work has shown that despite California’s critical need for more housing, some localities have instituted more restrictive land use policies in recent years. SB 330 addresses this by prohibiting moratoriums and downzoning, ensuring that cities cannot limit new housing capacity at a time of such great need.”

The new law also includes anti-displacement measures: It bans the demolition of affordable and rent-controlled units unless developers replace all of them, pay to rehouse tenants, and offer those renters first right of return at the same rent.

“Scarcity drives up cost, whether you are paying rent or trying to buy a home,” Skinner added. “And the skyrocketing cost of housing hurts all of us, whether it’s our neighbors who are driven out of the communities they grew up in or the many who end up homeless. SB 330 helps us get more housing now. We need it fast.”