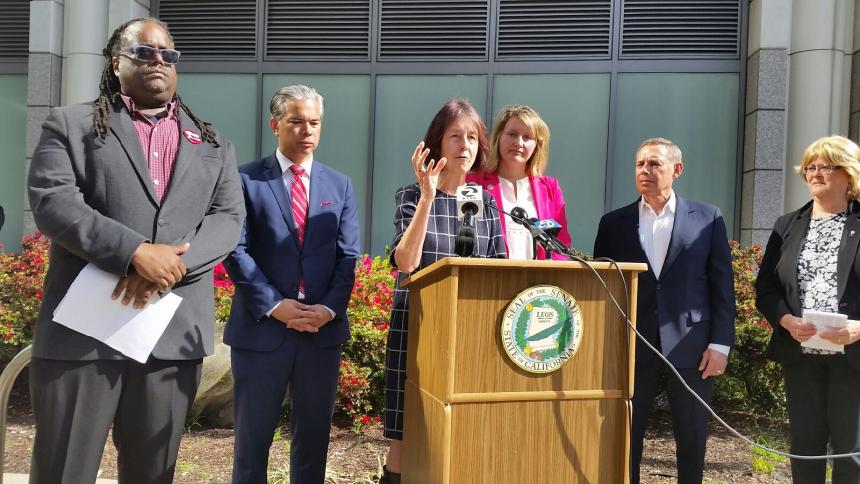 SB 37 will provide California with a sustainable revenue source by increasing taxes on large corporations that recently received a massive federal tax cut. SB 37 would allow the state to capture a share of that windfall by raising corporate income taxes on the top 0.2% of companies that do business in California. SB 37 is also designed to reduce California’s income inequality by closing the gap between what corporations pay their CEOs and their average employees.

“Corporate profits are at an all time high, yet the portion of tax revenue California receives from corporations is at close to its lowest point in 40 years,” Skinner said. “SB 37 just asks corporations to pay their share, so we can cut income inequality and help fund our kids, our teachers, and our schools.”

“It’s shameful that California ranks 41st in per pupil spending nationwide when we used to rank in the top 10,” Wicks said. “SB 37 will provide California with billions in new revenues — revenues that will fund higher teacher salaries, more education programs, and early childhood needs.”

At the same time, income inequality has risen steeply since the 1970s, with the gap between top corporate pay and middle-class wages widening exponentially. In 1978, U.S. CEO’s were paid just 30 times the pay of an average worker. Since then, according to a 2018 report by the Economic Policy Institute, compensation for CEOs has skyrocketed to 312 times the pay of the typical worker. Today, the average CEO of a large corporation pockets about $19 million a year compared to just $54,600 for the typical worker.

And here in California, income inequality has risen faster than most other states, with California having the fourth highest gap between rich and poor.

SB 37 would raise the state income tax rate on the most profitable corporations — the top 0.2% of companies that do business in California and generate net revenues of more than $10 million annually — from 8.84% to 10.84%. This change will increase state revenues by an estimated $2 billion.

Additionally, SB 37 is designed to further increase the tax rate on large corporations based on the disparity between the company’s executive pay and its average worker pay. These increases are estimated to generate an additional $2.5 to $3 billion annually.

“Increasing taxes on big corporations and incentivizing those corporations to pay their employees higher wages is a progressive way to capture new funding for our schools and other programs, while reducing the income inequality of regular Californians,” Skinner added.